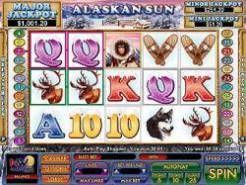 Another addition of the NuWorks gaming software is the Alaskan Sun Slot game. Obviously there is no guessing needed on this game as many as their other games as well, when you pretty much know what the game is all about – or at least, what its theme is all about; the Alaska feel.

Contrary to what you might feel against the cold, winter atmosphere, this game will keep you hot in the game and hot in the winnings. The Alaskan Sun slot game is a fast paced game, where you will rarely have to wait for the reels to end and your games to continue; hence, lots more games and spins equals to greater winning combinations and chances.

If you look into the NuWorks games, you will notice they are detailed, stunning graphics, and Alaskan Sun is no exception of this. You will notice characters/images such as: an female Eskimo, and igloo with a colourful pink background sunset (at least it looks like a sunset), a Siberian Husky dog, a polar bear, a reindeer, a fish, a pair of snow shoes (but not the usual snow shoes you think about, the shoes on rackets), and then a few letters and numbers, such as an A, K, Q, J, 10, and 9, all with a little snow coating on the top of them.

The wild of the bunch is the Eskimo, which can substitute most other images in order to get you a winning combination. When we said most images, we meant it will substitute them all with the exception of the scatter imagine. Make sure you keep your eye open for the Eskimo, which should appear on the 2nd, 3rd, and 4th reels only.

As for the scatter image, that is the igloo with the picturesque background, and these symbols will activate special game features on the Alaskan Sun slot game for you.

Alaskan Sun slots is a 5-reel with 25 pay-line slot game, comprised of simple reel interaction; but, simple is better in most occasions, where you will be able to get more games in while still enjoying the beautiful imagery of the game. This slot game will pay you a descent prize pool of $5,000 by getting 5 of a kind of the Husky dog, after all, where would you be without them way up in the isolations of Alaska? Give it up for the Husky!

Within the featured games, there is the Alaskan Sun Pick game triggered by the Eskimo coming out. This special game will allow you to touch an Eskimo giving you numbers between 1 and 10, which will later be multiplied together to give you your bonus prize of up to 1000 of your initial bet.

Now, if you get 3, 4, or 5 scattered images, you will get 10, 20, or 50 free games! With so many free games you are odd to win some good free cash and jackpots, so make sure you play the game, and make sure you experience the rush of the Alaskan Sun slots.