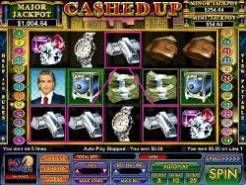 Feel like a Billionaire without having to have won anything yet… which you will regardless on this wonderful slot game called Cashed Up. The slot game Cashed Up, as you can imagine, is themed to the glamour of money, of wealth, and cashing up on the slot game! As any other slot game, the goal is to get your winning combinations on the reels of the game created by the NuWorks Gaming Software, and provided to you for real money at the Buzzluck Casino .

Do not wait for cash just to magically appear at your hands, and instead, get your hands on your big winnings now by playing Cashed Up – so join Buzzluck Casino now to do so…

Cashed Up is composed of a glamorous soundtrack, reminding us of a mix of casino atmosphere and game show music, as well as of course made-up of graphics representing wealth – either by characters or by valuable products. That said, we have the following symbols included in the Cashed Up game such as: A Vault (or also known as a safe), a gold Coin with a dollar symbol on it, like any billionaire story – the Tycoon, and Socialite (or glamorous lady), a speedboat similar to a yacht, some Stocks (similar to bond papers), Gold Bullions (or bricks), Bank Notes (or just packets of money), Gems, Silver Bullion (bricks), an expensive looking Watch, and a very fat Wallet (as in it looks like it is filled with tons of money).

From that array of graphics, the game has the Vault (safe) as the wild symbol, which can substitute all but the scatter symbol into any other symbol in order to make a winning combination. The scatter symbol is the golden Coin, which if you get a certain amount of them on the reels and pay-lines, you will trigger featured games or bonus games, which the winning prizes will be multiplied by the bet amount you make – adding to your potential winnings, and great gaming experience.

This 5 reel and 25 pay-line slot game is your ticket to a wonderful $15,000 Jackpot, achievable by playing all 25 pay-lines and getting 5 of a kind of the wild symbol, the Vault (safe).

In addition to the jackpot, you can get the Free Games feature by acquiring 3, 4, or 5 scattered symbols anywhere, which will get you 8, 20, or 100 free games, with a bonus prize equal to the bet on each free game, while all other winnings are tripled during. Take note that you will be able to trigger more free games during the feature round, as well as trigger other feature games such as the Money Mania Feature.

The Money Mania Feature is only activated when you get a wild symbol on either reel 1 or 5. You will be able to select a Vault to reveal your multiplier amount, either 2, 3, or 4. 10 Vaults will appear and you will be able to select them in order to award you up to 100 times your bet (which activated the game). The game however will end once you select a Vault that displays an “IOU” – unfortunately.

Play the game, win the money, and become part of the Cashed Up experience of wealth, and glamour;