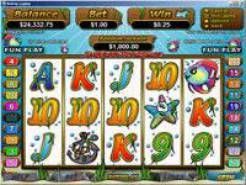 Play Now
Forget about the hit television show, Voyage To The Bottom Of The Sea, its time to dive straight into Real Time Gaming’s slot, “Sunken Treasure.”

“Sunken Treasure” is a 5 reel, animated video slot with 20 pay lines. The theme is all about a deep ocean excavation, only instead of searching for exotic water life, the goal is to unearth prizes and cash. All the symbols reflect the deep sea theme. The wild symbol is represented by the diver, and he will only land on the second, third and fourth reels. When the diver wild lands, it will replace all the other symbols with the exception of the scatter symbols, and when it lands, it will double winning combinations. The scatter symbol consists of the sunken ship. This icon is the key to launching the sunken treasure bonus round, provided that you land at least three on a pay line. In the sunken treasure bonus round, players pick among treasure chests. The number of treasure chests to choose from, depends on the number of sunken ships landed on the reels. So, three ships equals three chests to choose from, and 4 will produce four treasure chests. Each chest contains either 5 free spins or a winning multiplier that can go as high as 10 times. All wins in this round are tripled. If you manage to open a chest that has either a red or blue jewel, you will then play a second bonus round, called the jewel pick bonus. In the jewel pick bonus round, each pick rewards you a bonus pick. Picking a blue jewel can produce a winning multiplier between 10 to 100 times. Picking a red jewel is good for a winning multiplier between a 100 times to a 500 times multiplier. The other symbols in “Sunken Treasure” are a rusty anchor, fish, starfish, a treasure chest, along with the playing card numbers, nines, tens, jacks, kings, queens, and aces. If you are ready to go on a deep sea voyage of a lifetime, then all it takes is a penny to work your virtual scuba gear. Players can place bets themselves or have them setup in a sequence through auto play mode. “Sunken Treasure” also comes with a progressive jackpot that can be won after any spin of the reels.
Play Now