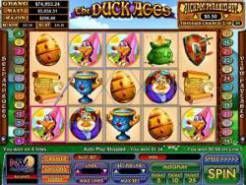 You might be familiar with the famous Disney caricature of Donald Duck… as well as Donald’s nephews and even Scrooge McDuck, within other duck characters all resembling each other by looks, and caricature style; well… this slot game of The Duck Ages is basically, a comedic representation of the same style ducks in the medieval times, with castles, Duck knights, and the metal knight armour as well. Definitely an amusing slot game you will love to play and win at – just join Buzzluck Casino now to try it out for yourself.

As mentioned above, the graphics are relating to Donald Duck with the medieval times – hence, the main character, also known as the wild symbol, which can replace any other symbol for a winning combo, with the exception of the scatter symbol, is a couple knight ducks. One of them is a White Knight (thin duck), and the other is a Black Knight (a bigger, fit duck), both of which only appear on reels 2, 3 and 4 of the slot game, paying double your prize when the White Knight appears for a winning combo.

Moving on to the scatter symbol, which will activate feature game(s) when 3, 4 or 5 appear on the reels; this symbol is then the logo of the game on a blue background, “The Duck Ages”.

From there on, you get the rest of the symbols of this epic slot game, involving a Maiden –a young girl Duck with a pointy hat-, a fat, small peak Duck King, an old duck girl –Swan Queen-, a Castle, a Coat of Arms (which is a family seal in other words), a Shield (with a few small swords stuck to it), a green Bag of Gold, a Scroll with a feather pen, a beautiful, gold Jewelled Egg, and an Urn (blue with water in it).

First off, you can attain up to 10 re-spins if you get 3 or more White or Black Knights on reels 2, 3 or 4… with those same reels keeping still while the others re-spin.

You can also get 10, 25 or 125 free games when 3, 4 or 5 scatter logos appear anywhere on the slot game’s reels, while doubling your winnings.

Play the game, enjoy the Pyramid levels for your jackpot, and get as much gold from these gallant characters as you deserve – you will definitely enjoy The Duck Ages slot game.