The Heat Is On! Slots 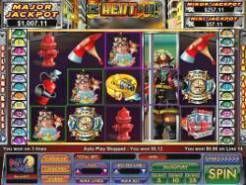 The Heat Is On! Slots

Did you ever dream to be a fireman when you were young? Well, there is an opportunity to play one while winning big on the slots now, all thanks to the NuWorks Gaming Software for developing such a wonderful game called The Heat Is On! Obviously, this slot game is about fire, and the firemen putting the fire out, with their trusty Dalmatian dog on their side – or should we say – on your side now, as you are part of the fire-crew to put the fires out for your change of great winnings! Now, if you are a women, why not check out this firemen putting out the fires… it is all in good fun! Join and play The Heat Is On! Slot s now!

The cliché, good old fashion, hunky for the ladies, Firemen, with the thick black moustache is the main character –obviously-. The main character is usually the wild symbol of the slot game, and as a wild symbol, they can replace any other symbols in order to make a winning combination for you – all but the scatter symbol. Take note that this symbol will only appear on reels 2 and 4 of this slot game.

The scatter symbol is quite fitting to a casino, and giving it is all online casinos nowadays, it is even more fitting and needed. The symbol is a Siren – obviously not a casino siren, but a fire-truck siren, but a siren nevertheless.

Since there is a fire-truck siren in the game, it is only fair to have the rest of that siren as another graphic, which is why when we move on into the rest of the graphics of the slot game, we will be able to see a fire-track, or as called in the game, a Fire Engine. Then, we have a Building, with flames coming out of each of the windows and smoke too, a Man, which looks as a fire victim, all messed-up and dirty, carrying a fish-bowl and a pussy cat. A Dalmatian dog with something flaming on his mouth, a fire Hat, a fire Hydrant, a fire Badge (which by the way is super elaborate compared to other badges from other officials), a pair of fire Boots, an Axe, a yellow fire Hose, and finally, a red Fire Extinguisher.

When you get 3 or more siren on the reels of the game, you will get a burning building appear, where the firemen will try to put out the fires coming out from each window. With this great feature game, you can get up to 30 free additional games each time you get a fire extinguished from one of the windows. In addition, if you get 3, 4 or 5 siren during this game, you can get an extra 5, 15 or 100 free games – what a hot prize!

The jackpot on this 5-reel, 25 pay-line game is a blazing $5,000 prize – not to mention the numerous hot times you will have playing this fabulous slot game; so play The Heat Is On Now!

Where to Play The Heat is On! Slots