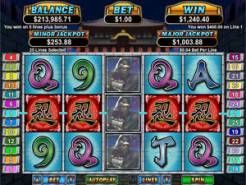 Play Now
The ninja are known for being the silent assassins of the Japanese Shogun. Soldiers of the shadows and the night, the ninja operate with ruthless procession. When it comes to Real Time Gaming’s “Ninja Star,” the ninja along with prizes and cash, work flawlessly in broad daylight.

“Ninja Star” is a 5 reel slot with 25 shadowy pay lines. Offering more than 24 winning combinations, the theme of this title is that of martial arts, and all the symbols reflect the ways of the ninja. The wild symbol is none other than the ninja himself. The ninja will only land on the first, third and fifth reels, replacing the other symbols with the exception of the scatter. When the ninja lands, it will expand over the entire reel, providing opportunities for dramatic winning combinations. The scatter symbol is the ninja star. Landing three of this icon the pay line will commence the free spins round. In the free spins round, players start off with 8 free spins, and winning combinations are tripled. The logo symbol will automatically change to either a wild or a scatter symbol. The ninja star scatter also influences the winning multiplier. Three are good for a 3 times multiplier, 4 produces a 25 times winning multiplier, while 5 nets you a 250 times multiplier. “Ninja Star,” also comes with the ninja scroll bonus round. To trigger this bonus round, players will need to land at least three of the game logo icons on a reel. In this bonus round, players will choose among 4 sets of scrolls, with each set containing its own prize. The scrolls contain winning multipliers from 75 times, 100 times and even a 200 times multiplier. The other game symbols include, a samurai sword, the front of a dojo, along with the playing card numbers, nines, tens, jacks, kings, queens and aces. If you’re to scale the virtual walls like a ninja, then all it takes is a penny to get the reels moving. Players can place bets themselves, or have them setup in a sequence through auto play. “Ninja Star,” also comes with a regular jackpot of 10,000 coins. There is also a progressive jackpot that can be won after any fateful spin. “Ninja Star” comes fully optimized for today’s smart devices, and it can be played at several online casinos, either instantly or for download.
Play Now