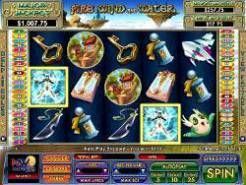 Not exactly the five main elements of the universe, or so believed by many around the world, and even depicted in famous Hollywood movies, such as ‘The Fifth Element’; but, at least we have three (3) of them building-up a top notch slot game for us all called Fire, Wind, and Water. Unlike what you might think, the theme of this slot game is not about the elements per se, meaning, you will not see images relating to Fire, to Wind, and not even to Water – the theme of this game, designed by the NuWorks Gaming Software, actually has a vibe of fantasy, of sci-fi almost. Regardless, it is a great slot game, with fast reel spins that will make it even so much more exciting to play and with even higher probabilities of winning sooner rather than later.

As mentioned above, this game does not include any images that relate or represent the elements, but rather have imagines relating to fantasy imagery. Let us start off with the wild symbol, which will help you, get a winning combination on your reels given it will allow you to substitute any symbol, with the exception of the scatter symbol, to make your winning spin. The wild symbol is then an Emblem, or amulet-like, golden pieces with one (1) precious rock on each one. Each rock differs in color too, such as red, green, and blue, with pieces over a purple silhouetted background.

The scatter symbol, which is the symbol that will trigger the feature game(s) for you – if you get a certain specified number of them – is in reality, three (3) symbols here, which I guess is where the elements are depicted after all, yet, still keeping that fantasy feeling on them. We start off with the Fire Element, which is a red hair with a fire and orangy background person or elf type person. See? Sci-fi/fantasy feel to it. The other elements are also elf people due to their pointy ears, and they are the Wind Element, a girl with green hair and green background, and lastly, the Water Element, which is another girl with blue hair, and blue background this time.

The remaining of the symbols include: the Earth Element, which looks like a knight, with horns, a Tree House, a Palace (with a space feel to it), a Pet (that resembles a pokemon character), a Tablet, a Ship (as in a space ship), a Vial (that looks like a cologne bottle), a Key (old style, golden key), a Flower (weird looking one too, as if it had arms and legs), and a very nice looking sword called the Blade.

In accordance to each scatter symbol we have the feature games too. For instance, we have the Fire Free Games Feature, which after acquiring 3, 4 or 5 Fire Elements, you will be able to get 8, 20 or 100 free all doubling your winnings, or multiplying it up to 6 if you get an Emblem or more triggering the games.

The Wind Free Games Feature will also give you 8, 20, or 100 free games with 3, 4, or 5 Wind Elements triggering it; but, this time, you will be paid tripled in winnings, even if you get an Emblem activating the game.

Lastly, the Water Free Games Feature will also give you 8, 20, or 100 free games with again 3, 4, or 5 Water Elements triggering it; this time however, you will get your winnings multiplied by four (4) times.