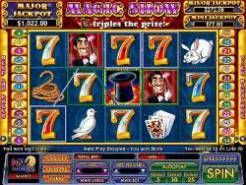 Did anyone say Houdini?

Well… not exactly Houdini per se, but at least we will get the necessary amount of magic excitement we need in our lives, especially with the appearing acts that this magic game will provide to us all, not just of bunnies and attractive magician assistants from the near death experiences of the magic boxes, but of money. That is right, by playing the Magic Show slot game , you will be able to see the appearing acts of prize money upon prize money for you! Now that is a magic show worth seeing and never missing out on.

Like any other magic show in the world, you will need your lead, the man of the hour, the Magician. The Magician is obviously then the main character of this slot game, and hence, the wild symbol too. As many of you might already know, the wild symbol is that which can replace any other symbol in the reels, with the exception of the other main graphic – the scatter symbol, and by replacing all in the reels, you will be able to get a winning combination – or at least have a higher probability of getting the winning combo.

The scatter symbol, which is another important graphic of the game, is the symbol that will activate the feature game(s). Obviously, seeing that this is about our most traditional magicians, then the symbol related to what a magician is with usually… a Hat. The hat is upside down on top of a table with yellow stars.

Let us continue with the remaining tools and graphics a magician needs and/or uses throughout his/her routine, and these include: the Lady (or assistant), the Magic Box (where the magician usually tries to cut the Lady in half – if not himself too), to Rabbit, the Dove, a very nice shiny Watch (old style with the chain), a deck of Cards, a Rope, and three (3) numbers of seven (7)… a Red Seven, a White Seven, and a Blue Seven.

Play the Magic Show Slots and get your full jackpot of $7,500 on this magical 5-reel, 25 pay-line slot game. Talk about a great magical show and trick, right?

The Magic Show feature will display 10 cards with one bonus card face-up. You will select a card up until you match the face up card for the bonus to be awarded starting at 100x the total bet decreasing with incorrect selections. In addition, you will have the chance of 5 or 10 free games if mentioned within the game. A game with many magic tricks below its sleeves, just for you.

Where to Play Magic Show Slots