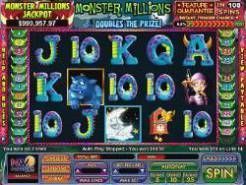 NuWorks Gaming Sotfware, the developer of numerous fabulous online slot games, such as Monster Millions, seems right on track with great themed slot games, many of which are related to great Hollywood movies and events; in this case, Monsters Inc. the movie. It comes with no surprise that a game called Monster Millions is about monsters, but… unlike any other monsters you would think of that kill, terrorise, and/or do any other numerous malicious activities, we will only see wonderful money paying monsters on this game. A fantastic reason to play Monster Millions Now !

The graphics are like any other of their many games, sharp and detailed – great really for the online casino industry. We start off with Bebo and Tang, the main characters of the game, and hence, the wild symbols too. The wild symbols are those that can replace any other symbol in the reels (except the scatter symbol) to make a winning combination, a paying combination. Bebo is a blue, fat monster with a horn at the top of its head; and Tang is a big, red monster, with a flat hair-due. Bebo will appear on reels 2, 3 and 4, doubling your prize when one or more of them appear; while Tang only appears on reel 3, tripling your winnings! If that were not enough, if you get both, you will have your winnings multiplied by 6! Let the Monsters come I say!!

The scatter symbol, which was mentioned above, is the symbol that will activate the feature games for you. These games are definitely going to be among your favourite, as they always augment your payout amount for the normal wins. This particular scatter symbol will only appear on reels 1 and 5, so keep your eyes open for this graphic of a Moon.

Among the remaining of the game’s graphics, we will be able to see slot symbols such as: the Lady (who appears to be wearing a purple night gown, and holding a candle), a big, fat, green Monster Manual, a Candle (candle holder with a candle on it to be more precise), a Clock (with the bird coming out of it), some monster looking letters: A, K, Q and J, and finally, a couple monster looking numbers: 10 and 9.

The jackpot on this fabulous 5 reel, 25 pay-line slot game will pay you up to 500 times your bet – a crazy great number to be won.

From there on, you have some great feature games, which were commented on above, such as getting monsters appearing on the 2nd, 3rd, and 4th reel of the game, revealing multipliers on your bet amount. In addition, when the Moon appears on reel 1 or 5, you will get a bedroom with 7 hiding places, from which you can select in order to find the 3 hidden monsters. The less tries it takes you, the more free games you will get, up to 50 free great games.

Now believe it or not, this game has 2-3 more feature games – great games that will pay you great amounts of money – if the jackpot was not enough of course. Play Monster Millions , and see for yourself the amount of dough you could make – it frightening!