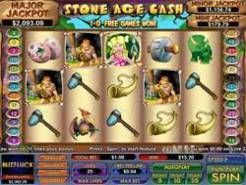 NuWorks Gaming is the software company behind the slot game Mammoth Wins , which is in similarity of feel and time (history-wise) to this also creation of theirs, and also a great slot gem, the Stone Age Cash slot. Obviously, one is more geared towards the Ice Age, and so on, while the other gathers you in the time of the real cave men (and not the pimping Geico commercial characters), with dinosaurs and the likes of the Flintstones – yet, you can’t negate the fact of their relating feel to one another, probably due to the fact they are both great slot games, and both paying you’re a rock bunch of money.

So let us crack open the first Flintstone, which is a Caveman, the main graphic of the game. He is the cliché Caveman, with the stone hammer, and the leopard toga, next to his cave door, and believe it or not, glowing, blonde, smooth hair. This graphic is the wild symbol of the game, which can then replace any other symbol of the game’s reels in order to give you a winning combination – unfortunately, there is one symbol that does not replace with a wild symbol, and that is the scatter symbol, but it is not all that bad.

The scatter symbol is actually good (in its own way) that it does not get replace by the wild graphic, as it activates feature games and jackpots for you. The graphic is a Volcano with smoke coming out from it, a forest at the foot of it, and a couple birds, or given the age of this game, a couple Pterosaurs, a dinosaur bird.

As oppose to what you might think a caveman and girls would look like, all dirty and messed-up, the next graphic is a Cavegirl, very cleaned-up and looking very elegant for a Cavegirl, with a bone between her hair and a spear on her hand. Weirdly enough, we follow with a Pet, but this per is really a green dinosaur with three (3) horns, then we have a Mastodon, which looks like an elephant sitting down; we then have a Sabretooth, as in Ice age the movie…a Pterodactyl with red head and sitting on a tree ranch, a huge, pink Flower, a rock Hammer, a pair of pink Eggs, one of which is partly broken and you can see an eye peeking out (kind of cool and creepy at the same time), a rock Wheel, and finally, a Horn. Seems to me like the transition between dinosaurs and ice age, which will add to your entertaining even more so.

When you reels show 3 or more Cavemen, you will be displayed with a pick feature game where you will be allowed to select a Cavemen in order to get 8, 10, 15 or 25 free games as a bonus prize, in addition to getting any winning prizes tripled in amount.

You can also take advantage of the Stone Age Cash feature game, which is activated when you get 3 or more Volcanos in your reels. They will then show a series of rocks you can select, in order to get the Caveman to smash them, giving you up to 500 times the credit of your triggering bet.

Talk about great games back –way back- in the day, right? Not to mention the possible up to $12,500 jackpot you can smash your way through in this fantastic slot game; so do not hold back, and play the game now!